Up Helly Aa is a tradition that originated in the 1880s. Since then the festival has been an annual occurrence in the Shetland calendar, it is held in the middle of the winter to mark the end of the yule season. The celebrations consist of a variety of fire festivals. In Lerwick a procession of up to a thousand guizers march through the town or village in a variety of themed costumes and burn their viking galley. 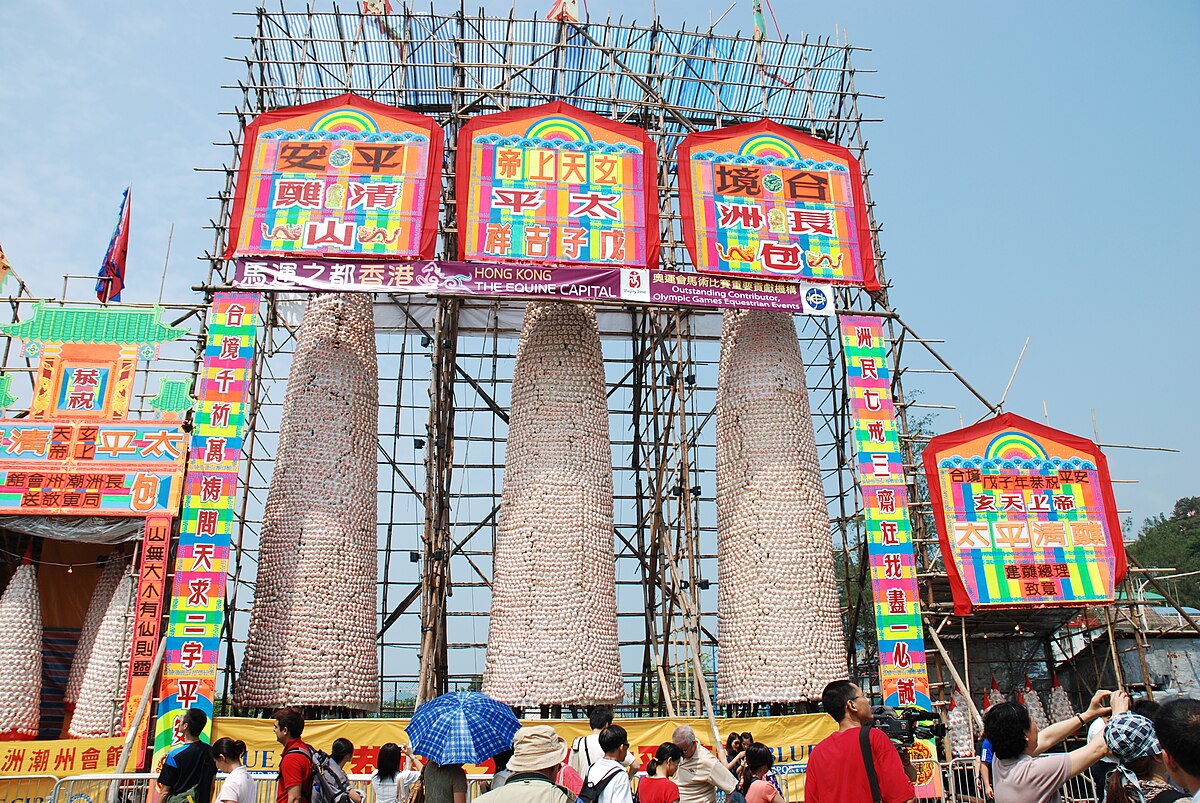 The Cheung Chau Bun Festival is held annually on the island of Cheung Chau in Hong Kong. It is staged to mark the Eighth day of the Fourth Month, in the Chinese calendar. The festival lasts for seven days. During this period their is a parade of floats, for three days the whole island goes vegetarian, burning paper effigies and the centerpiece of the festival is the ‘Bun Tower”. This consists of 60 feet high bamboo towers covered in buns. Competitors then scramble in the towers as strip off the buns as they descend.

Nyepi is a Balinese “Day of Silence” that is commemorated every new year according to the Balinese calendar. It is a Hindu celebration mainly celebrated in Bali, Indonesia. It is a day of silence, fasting and meditation for the Balinese. Nyepi is a day reserved for self-reflection, and as such, anything that might interfere with that purpose is restricted. The main restrictions are no lighting fires (and lights must be kept low); no working; no entertainment or pleasure; no traveling; and, for some, no talking or eating at all. Non-Hindu residents and tourists are not exempt from the restrictions. 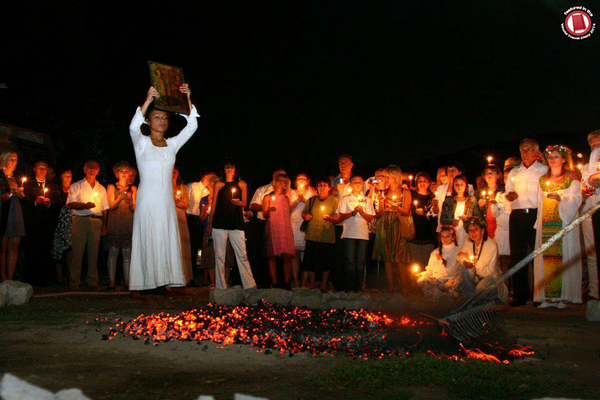 The Anastenaria is a traditional fire-walking ritual performed in some villages in Northern Greece and Southern Bulgaria. The communities which celebrate this ritual are descended from refugees who entered Greece from Eastern Thrace following the Balkan Wars. The festivals lasts for 3 days and involves various processions, music and dancing, and an animal sacrifice. The festival culminates with a firewalking ritual, where the participants, carrying the icons of saints Constantine and Helen, dance ecstatically for hours before entering the fire and walking barefoot over the glowing-red coals, unharmed by the fire.

#6 Night of the Radishes  (Mexico)

The Night of the Radishes is an annual event in the city of Oaxaca, Mexico, dedicated to the carving of oversized radishes to create scenes that compete for prizes in various categories. The event has its origins in the colonial period when radishes were introduced by the Spanish. As the city has grown, the city has had to dedicate land to the growing of the radishes used for the event, supervising their growth and distribution to competitors. Since the radishes do not keep after they are cut and quickly wilt, the entire event lasts only for a number of hours from the late afternoon to early evening of December 23.

A Hadaka Matsuri, meaning Naked Festival, is a type of Japanese festival, or matsuri, in which participants wear a minimum amount of clothing; usually just a Japanese loincloth. The festivals that take place in winter include a purification ritual with water (most often with ice water!) Following which the “naked men”, fight to grab an object sacred (such as a stick, or ball) that has been blessed by a Shinto priest and is supposed to bring good luck. Formerly rites of purification or initiation, some of these festivals have become real shows, attracting thousands of people. They often include games in the mud. 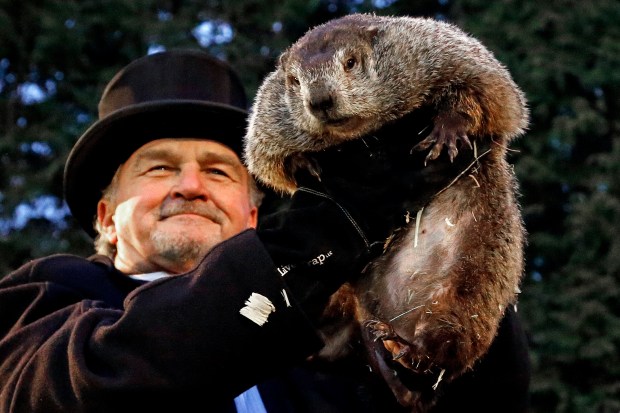 Groundhog Day is a popular tradition celebrated in the United States and Canada on February 2. It derives from the Pennsylvania Dutch superstition that if a groundhog  emerging from its burrow on this day sees a shadow due to clear weather, it will retreat to its den and winter will persist for six more weeks, and if it does not see its shadow because of cloudiness, spring will arrive early. While the tradition remains popular in modern times, studies have found no consistent correlation between a groundhog seeing its shadow or not and the subsequent arrival time of spring-like weather.

On the last Sunday of November, among the ruins of the Phra Prang Sam Yot temple in Lopburi, Thailand, a bountiful banquet awaits the guests of honor, none of whom are human. This feast is held in celebration of Lopburi’s thousands of macaques, thought to bring good luck to the area and its people. The Monkey Buffet Festival kicks off with an opening ceremony that includes performances by dancers in monkey costumes. When the monkeys arrive, hosts remove sheets from the banquet tables, revealing decorative spreads of vibrantly hued fruits and vegetables. The macaques jump across tables and climb towering pyramids of watermelon, durian, lettuce, pineapple, and more, indulging in the nearly two tons of offerings. 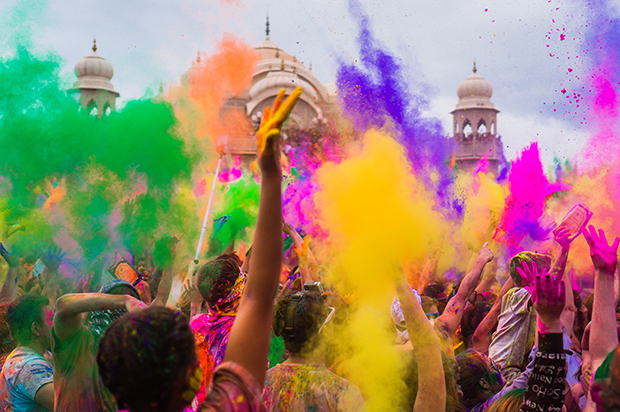 Holi is a Hindu spring festival. The festival signifies the victory of good over evil, the arrival of spring, end of winter, and for many a festive day to meet others, play and laugh, forget and forgive, and repair broken relationships. Holi celebrations start on the night before Holi with a Holika Dahan where people gather, perform religious rituals in front of the bonfire, and pray that their internal evil be destroyed the way Holika, the sister of the demon king Hiranyakashipu, was killed in the fire. The next morning is celebrated as Rangwali Holi – a free-for-all festival of colours, where people smear each other with colours and drench each other. Water guns and water-filled balloons are also used to play and colour each other. Anyone and everyone is fair game, friend or stranger, rich or poor, man or woman, children and elders.

La Tomatina is a food fight festival held on the last Wednesday of August each year in the town of Bunol near to Valencia in Spain. Thousands upon thousands of people make their way from all corners of the world to fight in this ‘World’s Biggest Food Fight’ where more than one hundred metric tons of over-ripe tomatoes are thrown in the streets. It started the last Wednesday of August in 1945, there was a disagreement and people started to pelt each other with tomatoes.