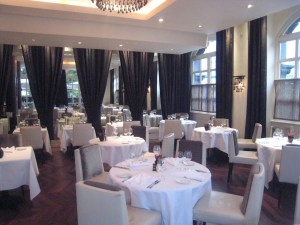 The Ledbury is a restaurant located on Ledbury Road, Notting Hill, London, England. The restaurant opened in 2005, under head chef is Brett Graham. The restaurant has won numerous awards and holds two Michelin stars. The atmosphere in The Ledbury is relaxed and unpretentious, the food is a mix of classic and modern flavors and textures.

La Pergola is a Mediterranean cuisine restaurant located in the Cavalieri Hilton hotel in Monte Mario, Rome, Italy. Since 1994, a talented German chef, Heinz Beck, has been dazzling sophisticated Roman taste buds. The setting is as elegant as you would expect: trompe l’oeil ceilings, wood paneling, beautifully set tables, flickering candles, and sliding glass walls. The staff functions so beautifully they’ve been compared to a Viennese orchestra. The restaurant holds three Michelin stars. 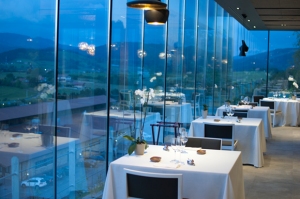 Azurmendi is located in a modern restaurant near Larrabetzu, a rural and tranquil town a few miles outside Bilbao, Spain. The modern glass building and it’s surroundings serve as a is a multi use space that combine a kitchen/dining area, a banquet space, a modern day greenhouse, culinary lab and a winery. The food while being very conceptual and technical is incredibly flavorful. 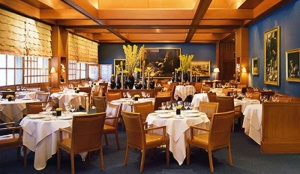 Le Bernardin is a restaurant located in New York City, United Sates and holds three Michelin stars. At this restaurant fish is the star and head chef Eric Ripert has a unique skill of transforming everything that swims into a pristine dish. Since he succeeded chef Gilbert Le Coze in 1995, Ripert has continued Le Bernardin’s tradition of serving luxurious French seafood with a modern and international flavor. With its butterscotch leather chairs and beige fabric-covered walls, Le Bernardin feels a bit like a corporate dining room, but enormous sprays of seasonal, twiggy flowers soften the décor.

Eleven Madison Park is a Contemporary American restaurant located at 11 Madison Avenue in the Flatiron District in New York City. Eleven Madison Park is located in a landmark art deco building with soaring 35-foot ceilings and a view of Madison Square Park. It is owned by Chef Daniel Humm and Will Guidara. The restaurant offers guests one multi-course tasting menu inspired by the agricultural bounty of New York and its culinary traditions. 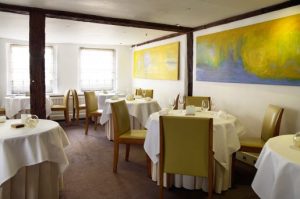 The Fat Duck is a restaurant in Bray, Berkshire, England. It is run by chef proprietor Heston Blumenthal, and was first opened in 1995 in a 16th-century building which had previously been used as a public house. The restaurant is known for its menu of unusual dishes, created following the principles of molecular gastronomy. The restaurant has an associated laboratory where Blumenthal and his team develop new dish concepts. The Fat Duck holds three Michelin stars. 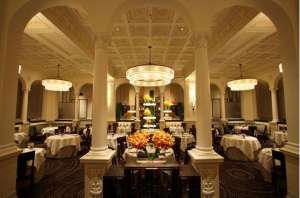 Chef Daniel Boulud’s restaurant is located on 65th Street in New York City. The distinctive setting boasts contemporary furnishings and finishes atop the restaurant’s grand neo classical architecture. The ambiance at the restaurant is impeccable – the dining room is formal yet intimate and the modern art on the walls gives it a contemporary feel escaping the stuffy and old decor that stigmatizes so many fellow contenders. The cuisine of this restaurant is French and it holds three Michelin stars.

Alinea is a restaurant in Chicago that opened in 2005. Its head chef and owner, Grant Achatz, is known for his preparations and deconstructions of classic flavors. The restaurant is named from the alinea symbol – the paragraph symbol – which is also the restaurant’s logo. The restaurant specializes in American, French and Italian cuisine. Chef’s Tasting Menu are served during Dinner hours. Formal attire is considered appropriate. Alinea holds three Michelin stars.