In 2011 David and Janean Richards of Canberra shot into the Guinness Book of Records after setting a new record for the largest number of Christmas lights for a private residence.  The couple decorated their home with an astonishing 331,038 different lights.  The annual Christmas display has been growing ever larger since Mr. Richards started it four years ago, and this year’s show required hundreds of hours of work.  In the end it included more than 18 miles of lights, as well as 15,000 cable ties and a 60ft Christmas tree at its center.

The Oglebay Winter Festival of Lights covers more than three hundred acres over a six mile drive throughout the Oglebay resort in Wheeling, West Virginia.  Directional Snoopys help guide visitors through the 6-mile tour. New displays for 2012 include a Leaping Frog display, an amusement park themed Strong Man display added next to the Ferris Wheel and Carousel, and an animated Volcano added to the popular Dinosaur Dell display. The entire Winter Festival of Lights has also been fully converted to energy-efficient, brilliant LED. 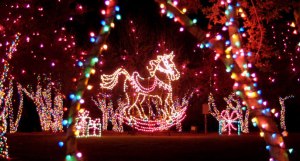 The Magical Night of Lights at Lake Lanier Islands, Georgia is one of the worlds largest animated light extravaganza that features 6 1/2 miles driving tour of giant illuminated characters that are comprised of millions of twinkling and moving lights.  Drive over the magnificent snowflake bridge, down through the 12 days of Christmas, up past the illuminated diamond wonder light, under the blanket-lit bridge, all the way to the dancing Holiday House, Santa’s Workshop, Christmas Carnival and more!  The Magical Nights of Lights journey doesn’t stop with the lights.  The Holiday Village is a must-see for everyone, complete with a bonfire for roasting marshmallows, delicious holiday fare, pony and amusement rides, holiday shopping and much more. 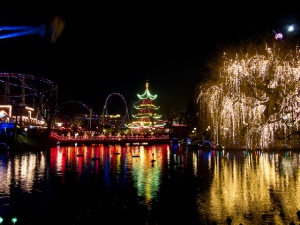 Situated in the very heart of downtown Copenhagen, Tivoli Gardens is the second oldest amusement park in the world.  During ‘Christmas in Tivoli’ you can experience a Russian Christmas alongside a Nordic Christmas, which boasts a mix of Norwegian, Swedish and Danish Christmas traditions.  You are beckoned into a wonderland of wooden houses decorated in the Nordic style – a classic Christmas universe with a splendid Christmas tree as the focal point. Bells on pine trees, twinkling fairy lights and thousands of glass and pearl decorations all come together to create the perfect Yuletide atmosphere.  In addition to the Russian Father Christmas, known as ’Father Frost’, his Nordic counterpart, Father Christmas, is back in residence this year at the Pantomime Theatre. The Nordic Christmas pixies and 50 special stalls will add to the spirit of the season along with the many rides – new ones as well as old favourites.  Tivoli tends to have more low level lighting compared to a lot of other light displays on this list but this lighting creates a spectacular atmosphere for wondering around this Christmas village.

Vancouver’s VanDusen Gardens transform into a festival of light over the holiday season.  Visitors can walk around the 55 acre gardens and enjoy all the lights, it is recommended to take a 2 hour walk in order to take it all in.  The pathways are renamed for the season and include “Gingerbread Walk” and “Candy Cane Lane”. While strolling along you will hear Christmas music playing and every 30 minutes see lights dancing in tune, a choreographic delight.  Children can visit Santa and his elves when he appears in Santa’s Living room or watch the Candy Cane Express model train on its Christmas journey. A visit into Mrs. Clause’s kitchen for a warm cup of hot chocolate may be in order along with a snack or perhaps some delectable sweet treats. There is a puppet show as well as choir concerts offered several times during the evening hours.

This is a Christmas light show with something different.  Instead of there being one large light display in Perth, there are hundreds of houses that go all out to decorate and outdo each other.  There is even a competition for the best light display to raise money for charity.  Online you can find a map with all the houses displaying for the Christmas season then you take a long, spectacular drive through all the dancing lights.  It is a feast for the eyes and heart.  This year there one owner spent 200 hours decorating and setting up a display tracked by PSY’s Gangnam Style song but has been switched off because too many people were coming to see it causing a health and safety concern in the small residential street.

Missouri has made the list of top light displays in the nation with the Sliver Dollar City lights display.  Silver Dollar City is using 4-million lights as part of the display, also in Branson is a one mile journey through 175-displays.   When you first arrive it’s impossible to miss the staggering amount of lights.  It’s an entire city gathered together to sing, laugh, eat, and enjoy all the splendors of Christmas.  And every evening the spectacular Tree Lighting Celebration shows off the 5-story Christmas tree on the square and its amazing music and light effects.  This towering tree beams with over 250,000 lights that blink and gleam to such famous favorites as ‘Carol of the Bells.’   Santa’s sleigh  glides through the Holiday Light Parade.  Shining bright with over 80,000 lights, this parade rides through the city each evening and will illuminate every inch of the way.

Each year in Medellin, Colombia hundreds of thousands of lights are artisticaly arranged in dazzling and colorful light shows to celebrate and honor the Birth of Christ. Most of the displays take place near and over the Medellin River where Christmas revelers enjoy the multiplying reflective effect of the lights over the water below. The river bi-sects Medellin, running North and South in the valley, thus giving everybody a nightly treat during the holiday season.  There are 16 million lights that cover almost 20 miles of the  Medellín valley, mainly along the Rio Medellín, and stay on until January 9, 2012.  The Christmas lights are intended to represent abstract interpretations of city buildings and monuments, and paísa history and traditions.  It’s also nice to live just west of the Pueblito Paísa, where a visit to this hilltop attraction can feel like walking through a table model of an Antioquian township. Here, a huge Christmas tree glows, giving the Valle de Aburrá a beautiful symbol of Christmas. 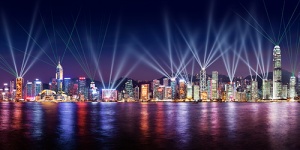 A Symphony of Lights is a famous laser lights and music show in Hong Kong. It is presented by the Hong Kong Tourism Commission through organizing 44 skyscrapers and landmarks that lie on the sides of the Victoria Harbor. Through interactive lighting and music show, it shows the vibrancy and glamorous night view of Hong Kong.  Named as the ‘World’s Largest Permanent Light and Sound Show’ by Guinness World Records, coloured lights, laser beams and searchlights perform in an unforgettable all-round spectacle synchronised to music and narration that celebrates the energy, spirit and diversity of Hong Kong. There are five main themes: Awakening, Energy, Heritage, Partnership, and the finale, Celebration. 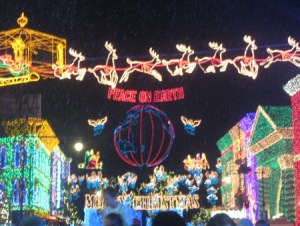 Walt Disney World Resort celebrates the Christmas season with holiday events and décor at each of its theme parks but the most spectacular light display can be found at Hollywood Studios.  Among the most striking are an illuminated globe with “Peace on Earth,” twirling carousels, flying angels, an over 70-foot tall Christmas tree and light canopies that create an illuminated “ceiling.” These icons are set against the illuminated Streets of America buildings.  The annual Christmas display has expanded to five million lights. It now includes more than forty displays, including multiple wreaths, decorated trees, sparkling snowflakes, a Santa with reindeer, carolers and toy soldiers – even a Nativity scene.  Dimmers allow its lights to be choreographed with the show’s holiday music, and approximately every 10 minutes, the lights dim and then “dance” to music. On some nights during Disney’s extended Christmas season, artificial snow falls over the Streets of America.  And, of course, for Disney fans, the Osborne Lights now has a host of Hidden Mickeys – the exact number isn’t known, but more than two dozen – among the dizzying display.

← Top 10 Christmas Day Events
The End of the World List →