Now that December is here and Christmas is fast approaching we decided to spend this month creating various Christmas lists.  Our first list features Christmas traditions from around the world that may seem strange and unusual to some.

Christmas pudding is a type of pudding served in England on Christmas Day.  Traditionally puddings were made on or immediately after the Sunday “next before Advent”, i.e. four to five weeks before Christmas.  The day became known as “Stir-up Sunday”.   Traditionally everyone in the household, or at least every child, gave the mixture a stir and made a wish while doing so, but the wish will only come true if stirring clockwise.  It was common practice to include small silver coins in the pudding mixture, which could be kept by the person whose serving included them.  The usual choice was a silver three pence or a sixpence. The coin was believed to bring wealth in the coming year. Other tokens are also known to have been included, such as a tiny wishbone (to bring good luck), a silver thimble (for thrift), or an anchor (to symbolize safe harbor).  Once turned out of its basin, decorated with holly, doused in brandy, and flamed (or “fired”), the pudding is traditionally brought to the table ceremoniously, and greeted with a round of applause.

The religious celebrations of Christmas in Venezuela commence every year on December 16. From this day, mass services are held every morning until December 24th. This early morning church service is called Misa de Aguinaldo (“Early Morning Mass”). On each morning from December 16 – December 24, firecrackers explode and bells ring to call worshipers from bed in the predawn hours. While pious people may attend all the services, most Venezuelans make it a point to observe at least one of the nine carol services. In Caracas, the capital and largest city of Venezuela, there is a unique custom to roller-skate to local churches to attend this service. Because of this, many neighborhoods close the streets to cars until 8 a.m. Kids go to sleep ahead of time at night during the nine-day period. To wake themselves up early in the morning, they tie one end of a long piece of string to their big toe and let the other end hang out of the window. The next morning, roller skaters give a tug to any string they see hanging out of a window. After Mass everyone enjoys tostados and coffee.

Norwegian legend has it that when Christmas Eve arrives it brings with it a series of evil spirits and witches.  The evil spirits and witches could not just walk from place to place but needed a form of transportation to fly around and they often used brooms for this.  It is Christmas tradition for Norwegian families to hide all brooms, mops and brushes on Christmas Eve so that these trouble makers can not use them.

Children in Italy believe in a female version of Santa Claus called La Befana, an old woman who flies on a broom and brings presents. According to Italian legend, Three Wise Men asked La Befana for directions to Bethlehem. La Befana was asked to join them but declined three times. It took an unusually bright light and a band of angels to convince La Befana that she must join the Wise Men, but she was too late. She never found the Christ child and has been searching ever since. On January 6, the Feast of Epiphany, La Befana goes out on her broom to drop off stockings filled with treats to all the sleeping children of Italy.  The child’s family typically leaves a small glass of wine and a plate with a few morsels of food, often regional or local, for the Befana.  She is usually portrayed as an old lady riding a broomstick through the air wearing a black shawl and is covered in soot because she enters the children’s houses through the chimney. 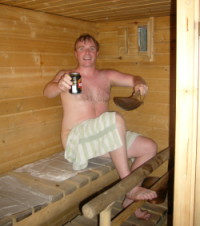 The most important date in the Finnish festive calendar is Christmas Eve, so in the afternoon, shops close and people finish work in order to get ready for the evening when they’ll attend a church service, or visit the graves of loved ones to place candles before sitting down with the family to eat Christmas dinner.  A traditional part of this preparation is taking a Christmas sauna.  Millions of saunas are heated throughout the land on Christmas Eve for the population to enjoy.  It is estimated that 70% of the population of Finland will enjoy a joulusauna on Christmas Eve.  The sauna in Finland is not just a place of refuge and relaxation. It is a bath. So the Christmas sauna has a practical purpose. With Christmas celebrated at the winter solstice, close to the new year and symbolized with the birth of Christ, it is the perfect time to cleanse your body to symbolize that rebirth.

Japan does not have a traditional Christmas dish.  Chicken from KFC is a specialty that can often be seen on the table next to sushi and steamed shrimp for a Japanese Christmas dinner. Today, it is possibly the closest thing in Japan to a Christmas tradition.  Every year in early December, KFC restaurants around the country start putting up order sheets to deal with the heavy demands during the Christmas period. Numbers show that their sales soar in December, making twice as much profit than in other months.  Today, KFC has 1150 restaurants across Japan.  Another Christmas tradition unique to Japan is that sending red Christmas cards to anyone in Japan constitutes bad etiquette, since funeral notices are customarily printed in red.  Christmas cards tend to be white usually, a color that represents snow and clarity.

In the Netherlands they call Santa, ‘Sinterklaas’ and he has a helper that goes by the name of Zwarte Piet, in English this mean Black Pete.  Some are quite shocked by Zwarte Piet calling him racist but some say that his black face is simply for chimney soot.  He charms children with pepernoten cookies and a kooky demeanor.  Each year, on Dec. 5, the morning before the feast of St. Nicholas, children all over the country wake up excited for gifts and candy while thousands of adults go to their mirrors to apply brown paint and red lips. In their Zwarte Piet costumes, they fill central Amsterdam and small village streets, ushering in the arrival of Sinterklaas who, in the Dutch tradition, rides a flying white horse. 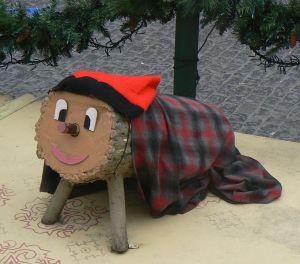 This is a widespread tradition from Catalonia.  Tió de Nadal means Christmas log in English.  Also the popular name for it is  Caga tió which in English means “shitting log”.  The form of the Tió de Nadal found in many Catalan homes during the holiday season is a hollow log of about thirty centimetres length.  Recently, the tió has come to stand up on two or four little stick legs with a broad smiling face painted on the higher of the two ends, enhanced by a little red sock hat.  Beginning with the Feast of the Immaculate Conception (December 8), one gives the tió a little bit to “eat” every night.  On Christmas day or, depending on the particular household, on Christmas Eve, one puts the tió partly into the fireplace and orders it to defecate.  To make him do so, one beats him with sticks, while singing various songs of Tió de Nadal.  What it drops is candies, nuts and it may also give out dried figs. When it is done, it drops a salt herring, a head of garlic, an onion or “urinates”. What comes out of the tió is a communal rather than individual gift, shared by everyone present. 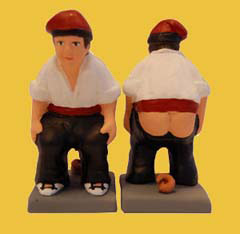 In Catalonia, as well as in the rest of Spain and in most of Italy and Southern France a Christmas tradition is to set up a whole city of Bethlehem.  In the nativity scene along with Joseph, Mary and baby Jesus is the Caganer.  He is usually placed in the corner for his privacy, as the caganer is a figurine, traditionally of a man, in the act of defecating, pants around his knees bending over with pile of feces at his heels.

Krampus is a beast like most from folklore of Alpine countries (Santa’s evil twin).  The job of Krampus is to beat and punish children who have misbehaved.  He is said to capture particularly naughty children in his sack and carry them away to his lair.  Traditionally young men dress up as the Krampus in Austria, southern Bavaria, South Tyrol, Hungary, Slovenia and Croatia during the first week of December, particularly on the evening of 5 December, and roam the streets frightening children with rusty chains and bells.  Krampus is featured on holiday greeting cards called Krampuskarten.