A pressure deficit of 100 millibars (2.95 inHg) was observed when a violent tornado near Manchester, South Dakota on June 24, 2003 passed directly over an in-situ probe. In less than a minute the pressure dropped to 850 millibars (25.10 inHg), which is the lowest pressure ever recorded at the Earth’s surface when adjusted to sea level.  The town was completely annihilated by the tornado, rated a F4, and has since become a ghost town.

#9 Largest Distance a Person is Carried by a Tornado 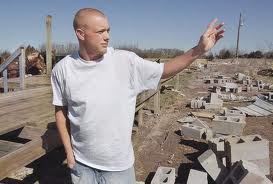 On March 6, 2006 Matt Suter was sucked up and out his mobile home in Missouri.  The tornado sucked up the windows, the walls and then 19 year old Matt Suter.  The F2 tornado carried him 1307 feet (398 meters), or more than four football fields.  Although unconscious at the time, he survived to tell the tale.  In another great survival story an Oklahoma baby survived after a tornado threw her 100 feet in 1999. 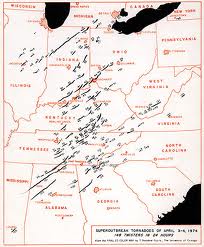 The longest track supercell thunderstorm tracked 790 miles (1,271 km) across 6 states in 17.5 hours on March 12, 2006 as part of the March 2006 Tornado Outbreak Sequence. It began in Noble County, Oklahoma and ended in Jackson County, Michigan, producing many tornadoes in Missouri and Illinois.  The outbreak produced 105 confirmed tornadoes and at least 13 deaths were blamed on this storm.

On June 4, 2013, the National Weather Service office in Norman, Oklahoma announced that the May 31 2013 El Reno, Oklahoma tornado – responsible for killing 20 people including 3 storm chasers is now the widest tornado ever recorded in the United States at 2.6 miles (4.2 km) wide. The National Weather Service confirmed that the El Reno tornado, which was originally ranked as an EF-3 tornado, has been reclassified as an EF-5 tornado. With wind speeds of 296mph, this tornado almost breaks the record for highest wind speed as well. Its path across the ground was 16.2 miles.

The 2011 Joplin tornado that struck Joplin Missouri on May 22, 2011 is said to be the costliest in recent history.  The EF5 tornado tracked eastward across the city and then continued eastward into rural counties.  The insurance payout is expected to be $2.2 billion—the highest insurance payout in Missouri history and higher than the previous record of $2 billion in the April 10, 2001 hail storm.  Estimated damages from the storm are 2.8 billion.

#5 Highest Winds Observed in a Tornado 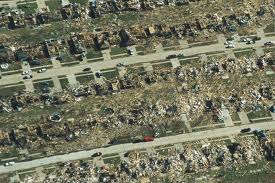 The “Oklahoma City tornado” of May 3rd, 1999 had the highest recorded wind speed.  A Doppler On Wheels situated near the tornado measured winds of 301 +/- 20 mph (484 +/- 32 km/h) momentarily in a small area inside the funnel approximately 100 m (330 ft) above ground level.  This tornado’s remarkable wind speed (at the high extreme of the Fujita Scale’s F5) led to much speculation that the scale would be modified to include an F6 category.  This speculation ignored the fact that the Fujita scale measures damage rather than windspeed, since the scale was developed prior to the introduction of Doppler weather radar.  The damage caused by an F5-designated tornado leaves very little room for a higher category.

#4 Longest Duration of a Single Tornado

The Tri-State tornado (1925) is the longest continuous track left by a tornado ever recorded in the world, this is also the deadliest tornado in US history.  The tornado traversed 219 miles (352km) across southeastern Missouri, southern Illinois and southwestern Indiana in about 3.5 hours.  Though there has been some discussion as to whether this was a single tornado or a tornado family, recent and ongoing detailed reanalysis has found no break in the path and in fact that the tornado began 15 mi (24 km) before previously thought. 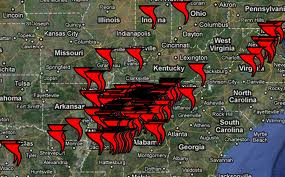 The April 25th–28th 2011 tornado outbreak is the most extensive tornado outbreak in US history.  It was an extremely large and violent outbreak, popularly know as the 2011 Super Outbreak.  The outbreak affected the Southern, Midwestern, and Northeastern United States, leaving catastrophic destruction in its wake, especially across the state of Alabama.  329 tornadoes were confirmed during this outbreak.  April 27th saw the most prolific tornadoes with 208 touching down that day.  Four of those tornadoes were ranked as EF5.  This outbreak had a staggering 16 tornadoes on the ground at the same time at the peak of the outbreak.    346 people were killed during this outbreak.  April 27th was the deadliest tornado day in the US since the 1925 “Tri-State” outbreak.

#2 Deadliest Tornado in the US 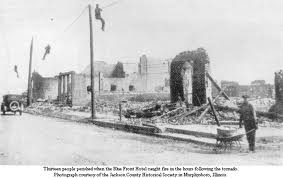 The Tri-State tornado, which occurred on March 18th , 1925 killed the most people in US history.  695 people were killed in Missouri (11), Illinois (613), and Indiana (71).  The outbreak it occurred with was also the deadliest known tornado outbreak, with a combined death toll of 747 across the Mississippi River Valley.

#1 Deadliest Tornado in the World

The Daulatpur-Saturia, Bangladesh Tornado occurred in the Manikganj District, Bangladesh on April 26, 1989.  It was the deadliest tornado in history.  Damage was extensive over the area, as countless trees were uprooted and every home within a six square kilometer area of the tornado’s path was completely destroyed.  The tornado was estimated to be approximately one mile wide, and had a path that was about 50 miles long, through the poor areas and slums of Bangladesh.  There is great uncertainty about the death toll, but estimates indicate that it killed around 1,300 people.